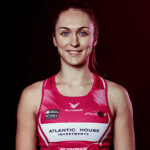 After nearly two years away from the Hertfordshire Sports Village, Saracens Mavericks welcomed home supporters back into their venue with a 53-51 win over rivals London Pulse.

The first quarter opened with a Pulse break at their centre pass which Mavericks took straight to goal. Captain Sasha Corbin treated the home supporters to a sprinkle of pizazz when she took Mavericks’ first centre pass and set a backwards, over the head pass to Beth Ecuyer-Dale. Unable to complete the centre pass, Pulse took advantage of the possession and made the score 1-1.

A ping pong first few minutes saw neither team take full control but it was Saracens Mavericks who had the smoothest route to goal and sailed into a healthy 16-9 lead after the opening 15 minutes.

The changes impacted positively for pulse with Ashleigh Dekker, scholes and Olivia Tchine linking more effectively. The attack end opened a little easier for the east London team but it was Mavericks' missed shots at the other end that allowed Pulse to edge their way closer.

The combination of Razia Quashie, Jodie Gibson, Gabby Marshall and Ecuyer-Dale worked to try & slow down the pace of Pulse's new-found attack. Meanwhile, at the other end, Sasha Corbin, Kadeen Corbin and Ine-Mari Venter started to find the space to split the Pulse defence. The quarter ended 27-20 to Mavericks.

With a solid first-half under their belts, Head Coach Kat Ratnapala left her team unchanged whilst pulse rang the changes and bought new Australian signing Sacha McDonald into goal attack.

Mavericks started the quarter strong, putting four unanswered goals on the board. Kadeen Corbin was showing her court IQ and was finding space through court that the Pulse defence just couldn’t match.

Marshall and Gibson were working hard to shut down the top of the circle winning some ball and creating mistakes from a young Pulse side. They continued to put their foot on the pedal with both Corbin sisters linking with Venter to accelerate into a 13-goal lead. 45-32.

The final 15 minutes saw Jameela McCarthy and Georgia Lees enter for the home side and Tayla Honey re-nter the game for Pulse in the centre position. Pulse had an impressive momentum shift and went on a roll of scoring in chunks of three goals. Mavericks - unable to find the answers defensively - also missed some crucial shots and Pulse kept edging their way back to Mavericks.

A tactical change called by the Red & Blacks with Kadeen Corbin shifting back into the goal keeper position and Chloe Essam entering at goal attack. Pulse called for not wholly within the circle meant that they handed their possession straight to Mavericks who were unable to convert. For a rocky end to the game, Saracens Mavericks had done just enough to get over the line and finished the game with a 53-51 win.