Severn Stars ace Cat Tuivaiti is back in the Vitality Netball Superleague and while she is a long way from home, she is relishing a return to the game she loves more than ever.

It’s hard to imagine any there’s upside to a dirty nappy, but Tuivaiti is convinced they were instrumental in renewing her romance with netball as Stars prepare to return to action in front of their fans this weekend.

But that was just the beginning of a frightening few days for the first-time parents, who soon saw their tiny son taken away to a neonatal special care unit – he remained in the Auckland hospital for several days.

“I’m looking at the game from a different perspective, because I have left the game for a little while and I’ve come back as a mum.

“So I think….I think I might love it more.

“Because I can concentrate on just netball. I’m not too worried about the outside world.

“I spent a lot of years being concerned about stuff like that, how I was perceived, and if anyone liked the way I played or they didn’t like the way I play.

“But right now I love the game so much because the rest of my life is so busy and crazy and hectic and full of nappies and tears…and then there’s my kids!”

Leo doing all the work.. https://t.co/sWNXICPnYb

Back in the Superleague

In all seriousness, she was quite to reiterate, “The game means more to me. I can love it a lot more and it’s different on a whole anyway.”

Tuivaiti has missed Stars opening three games of the season through injury, but has been watching on from the bench in her position as a specialist coach.

Stars are back in front of their own fans this weekend, when they host Saracens Mavericks in a game you can watch live on the Sky Sports YouTube channel on Sunday from 3pm. 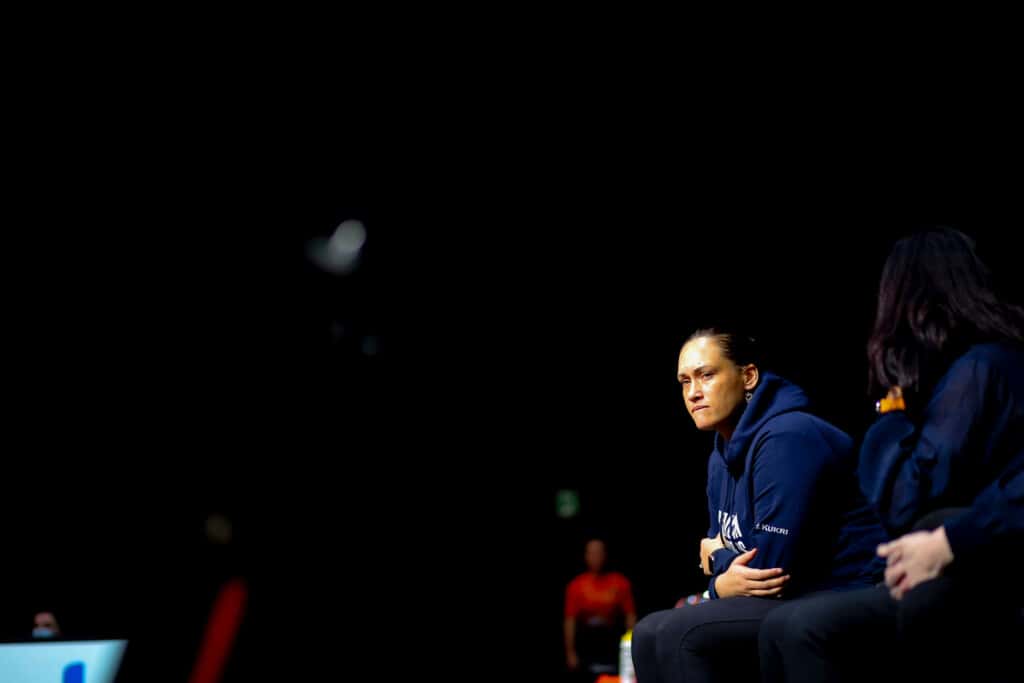 Cat Tuivaiti has been limited to a coaching role so far this season for Severn Stars (Image: Ben Lumley)

The visit of Mavs – who have won each of their first three games – is Stars first league home clash since 2019 after last season’s matches were played out in just two venues due to Covid-19 considerations.

Tuivaiti admits making the difficult decision about whether or not to uproot oneself – or an entire family – for a career opportunity inevitably carries both risk and weight for any female athlete.

It’s why she appreciated Sara Francis-Bayman’s surprising decision to take an 18-month leave of absence as head coach of title-holders Loughborough Lightning.

Sara cited shifting priorities as the reason behind her move to Australia, where new wife Stacey Francis-Bayman is a defender with Suncorp Super Netball side West Coast Fever.

“It has to be something you think about,” said straight-talking Tuivaiti (nee Latu), who also has 30 caps for Samoa.

“I think not only is it really important to be in a good space mentally to give everything to the sport there’s not a lot of money in it, that’s not a huge secret.

“But it’s such a beautiful game, and I think the stuff that’s outside of the actual netball court and the stuff you do see on TV is starting to be looked after now and I think it’s beautiful.

“I think it’s something that should be celebrated and talked about because those are hard decisions to be made.

“I think Sara stepping away would have taken huge courage, it would have been hard, but this is a game of netball and that’s the love of her life. Sometimes they feel like the same thing but they aren’t, so it’s really awesome that she can do that and is supported by her team.

“It’s changing the face of netball for women, and I love it.”