Saracens Mavericks face a weekend double header looking to bounce back from their first two defeats of the season and captain Sasha Corbin has outlined the franchises ambition to make the top four.

It’s been six years since Mavs reached the end of season semi-finals, something that has frustrated the players as well as the fans and most observers who see a richly talented squad.

Sitting fourth in the table with four wins from six games it’s been a good start for the Hertfordshire franchise, but the hard work continues as they chase a first top four finish since 2016.

In the latest episode of Off the Court, Corbin opened up to Caroline Barker and Tamsin Greenway on the determination within the group to put that right.

“We have not been there for so long, it’s so frustrating to be part of a team that has so much potential and just can’t get over the line,” Corbin says honestly.

“It’s always the second half of the season that starts to show, so that’s my focus.”

Mavericks started the season in blistering fashion, winning each of their first five games, but a pair of defeats to the two teams that have made perfect starts have represented the first bump in the road.

Corbin and her teammates pushed Manchester Thunder all the way in Round 5, while a comprehensive defeat to defending champions Loughborough Lightning followed in Round 6.

A double header weekend throws up matches against Strathclyde Sirens and traditional rivals Surrey Storm and Corbin is not underestimating the challenge.

“This whole league is crazy right now. It’s so competitive and there is no team that you can let up on.

“Of course the natural top four, would be the teams that you always go for and they are the ones you are looking to get one up on.

“You can then think if we are competing with these guys then we can compete with anyone.

“But Surrey Storm, Pulse and Sirens too, these are teams that when they put their whole game together they are winning games – you just can’t count anyone out.”

Stay for the unreal pass by @Sasha_Corbin 😏

Inconsistency has been the word that has dogged Mavs, but those first five games represented a new-found belief and understanding that Greenway believes will have them in the top – not to mention Corbin’s brilliant displays.

So what’s the key? 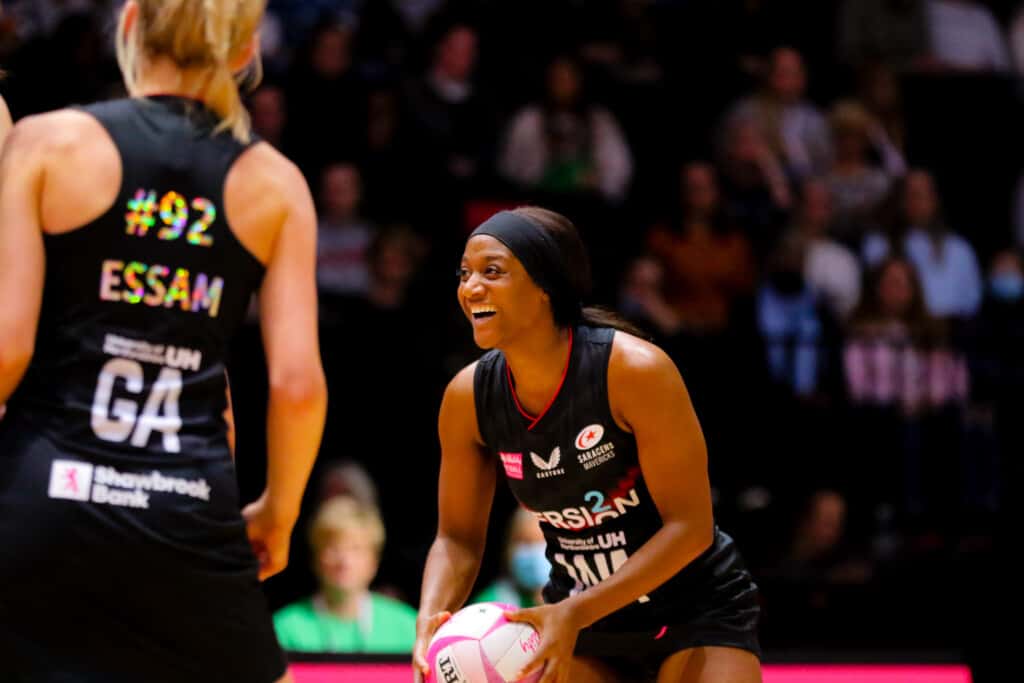 Mavericks face two games in two days over the weekend as they look to return to winning ways (Image: Ben Lumley)

“It’s something that has always come with Mavericks – there is a lot of speed and sometimes when something is not on – playing with that pace – that disconnect can look very messy.

“I think now, because of how long we have been playing with each other we know where people want the ball so much more.

“Now there is that trust that if you were going to past it, the player will get on the idea.

“Definitely it’s about reading the play, not forcing it and going down other routes – that’s been a huge part of our efforts moving forward in trying to be more clinical.”

Corbin herself is enjoying a fantastic season. The 33-year-old, who was part of the Roses squad that won gold at the 2018 Commonwealth Games, has started every game at wing attack and her link-up with a familiar set of teammates has proved a recipe for success.

With Serena Guthrie’s shock retirement after announcing her pregnancy there is potentially a spot up for grabs in the England squad. However Corbin remains focused on the task at hand – delivering for Mavericks

“England would be an icing on the cake if it was too happen, but my sole purpose right now is to try and make top four with Mavericks.

“This is my 17th season playing netball, my 16th season in the Superleague and my 11th season with Mavericks.

“That’s so cool to think I have been playing for that long. All I want to do is have fun and enjoy – that’s where I am, so I don’t want to put any extra pressure.

“I want to play well for my club and then whatever happens.” Sasha Corbin

Watch Sasha Corbin’s extended Off the Court interview on the VNSL YouTube channel, where you can catch highlights from every game played as well as in-depth features and conversations through the season